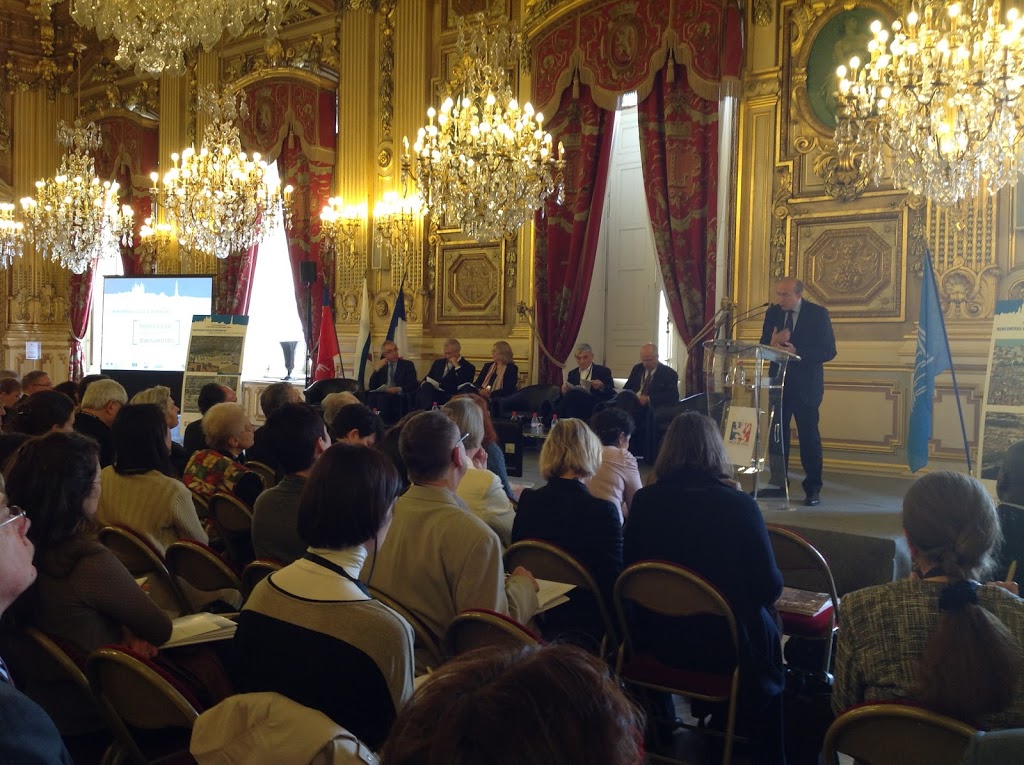 Bill attended the Cities and Heritage Meeting held in Lyon on the 22nd – 24th May. The meeting was organised by the Lyon municipality, in partnership with the Organisation of World Heritage Cities, to celebrate the 15th anniversary of the designation of Lyon as a world heritage site by UNESCO. The meeting’s theme was a sustainable future for world heritage cities.

Lyon is a wonderful historic city which developed at the confluence of the Rhôneand Saône rivers, first as the Roman capital of Gaul then in Renaissance and later guises. During the 16th century it was the home of the French court while they wade wars in Italy. A major silk-making industry developed at the north of the peninsula between the two rivers. Despite being the fourth largest city in France, the well-preserved historic quarter has an intimate atmosphere that belies the sheer size of Lyon and deserves to be better known as a heritage tourist destination in the UK. Here are covered alleyways which connect one street to another by way of hidden Renaissance courtyards, graceful grids of 18h century buildings, a grandiose Neoclassical Palace of Justice and an imposing riverside hospital which would not disappoint any capital city as a country’s parliament building. Graceful bridges span the two rivers, while river bank esplanades open up vistas to appreciate the richness of the city’s architecture. Above all of these stand the ornate edifice of the Fourvière Basilica and the Tour métallique.

The meeting was part-workshop, part-celebration of world heritage cities and the work municipal officers and politicians are putting in to grapple with heritage preservation and economic development. Can both be mutually compatible, where heritage opens up opportunities for financial improvement, or are they in such conflict that heritage is an obstacle that urban planners need to overcome to ensure the economic well-being of the city? The meeting met this question head on through case studies followed by sessions about sustainable development, citizen participation and adaptive reuse. The audience was a mixture of municipal officers and elected politicians.
Towards the end of the meeting a representative from Mali spoke about recent damage to Timbuktu and the work to restore structures and salvage burnt documents. The presentation put much into perspective regarding managing world heritage cities against risk.

Sustainable Development
In many cities developers, planners and politicians view heritage as a brake on economic growth. Historic buildings are often viewed as an impediment to successful development and, at worse, torn down to make way for construction to ensure the city’s economy can continue to prosper.
The meeting presented examples where making the most of heritage and improving the historic environment can be drivers for development. All successfully put heritage at the heart of redevelopment, using heritage as an economic stimulant in very different ways. They brought to mind recent successes and failures in my own city of Sheffield where 19th century educational buildings central to the origins of the University have become a hotel and bars, and where new open spaces blend traditional city materials with modern designs, but also where the University has dropped a plan to convert part of the listed Jessops Hospital in preference for demolition to increase the size while reducing the cost of the new Faculty of Engineering, an inappropriate modern intervention into a square surrounded by listed buildings.
Lyon is creating a new riverside esplanade along the Saone which will build on the economic success world heritage designation has brought to the city through increased tourism.
Porto is regenerating the Morro da Sédistrict as a mixed-use, inter-generational area where new residents and tourists will both contribute to the city’s economy. Ruined buildings will be brought back into use with modern materials that echo the historic fabric.
Beemster, Netherlands, has a quality team who advise on new planning applications through identifying whether they contribute to what it is to be ‘Beemster like’. The team have worked with a cheese company to build a nee factory which is the largest structure in the world heritage area but relates to the divine proportion of Fibonacci’s Sequence of 1.618 that the Beemster landscape was originally laid out along.
Strasbourg has a green transport infrastructure policy which encourages greater spend in its city centre by ensure that lower numbers of cars make it a much more pleasant place to visit, shop, eat and drink.

Adaptive Reuse
The two key examples here were from Lyon and La Chaux-de-Fonds, Switzerland. The former’s Hôtel-Dieu has been a hospital since the medieval period, its grand 18th century facade and cupola dominating the west bank of the Rhone. It was enlarged up to the 20th century but became unsuitable for modern hospital health care. The scale of the building is staggering, perhaps best illustrated by two statistics – it has 2,000 rooms and 2 hectares of roofs. The city is now grappling with the challenge of revitalising the building for modern use while incorporating the different phases of construction. The plan is for a mixed use development including a hotel, convention centre, museum, apartments, offices and shops, while creating public access by opening inner courtyards and making thoroughfares.
In La Chaux-de-Fonds, which originated ss a 19th century watchmaking town, a strip of industrial wasteland alongside railway tracks at the bottom of the slope of watchmaking buildings will be redeveloped. New buildings will follow the same dimensions and axis of earlier buildings to fit with the 19th century urban rationale.
Hôtel-Dieu offers an exciting opportunity to reuse an historic building which is also a major city landmark. It is not without its controversy, as one Lyon resident told me many residents do not like a public building supported with public funds going into private for-profit use. The amount of public access being created does appear to counter this and I wonder how much these plans have been communicated to the wider city population.

Both plans involve new buildings and the architect’s drawings show very generic modern steel and grass structures which have been constructed in many European cities over the last 15 years. While the scale and form may relate to the historic architecture, the materials suggest ‘everytown’ buildings that do not relate to the older structures. If these designs on paper make it to concrete and steel they will be a lost opportunity by the architects to creatively and deeply engage with the original buildings in creating dynamic, modern and harmonious new structures.
Citizen Participation
This session highlighted the involvement of Lyon in the Heritage Open Days and in the guidance of managing the Albi world heritage designation. In Regensburg, Germany, came an excellent presentation on concrete methods to develop ground-up participation based on the understanding that cities are created from the continuous interaction between inhabitants and places. Municipalities need to mobilise their citizens, find ways to open up two-way communication between the people leading projects and residents. The question was posed – are citizens really at the core of public action and governance? The answers lie in designing urban objects to meet local realities, respecting citizens’ traditions and skills, and integrating citizens participation into planning and development. This is necessary to encourage representative democracy. It improves quality of life and strengthens social cohesion within community. But, to do so requires a new urban mind set – that heritage is not an obstacle but the resource for the whole community – and so change perceptions so that conservationists and developers are not on opposite sides.
This was one of the most inspiring presentations of the conference. It requires a different way of thinking from politicians and municipal officers, a letting go of control so that the municipality works more for sand with its residents rather than doing things to them. It should work well on the neighbourhood scale. In Sheffield the community assemblies went part-way to doing this, before being scaled back, and now it is left once again to the motivated individuals of residents’ associations and local forums to  take this form of participation to the council – on the outside calling in.
Summary
I left the conference inspired by what many cities are striving for in their desire to not just balance heritage and development, but in trying to use heritage as a positive driver of development which is brings out local distinctiveness as a force for economic growth rather than reducing city after city to a generic look-a-like. While world heritage designation is the motivation for the politicians and officers gathered here, the ideas and lessons can be applied to any town or city – but it does require a change of mind set and a broader, longer vision amongst the elected and the appointed than perhaps many urban areas are perhaps currently blessed with. At least for now. Some examples for this meeting can show some of the ways forward.