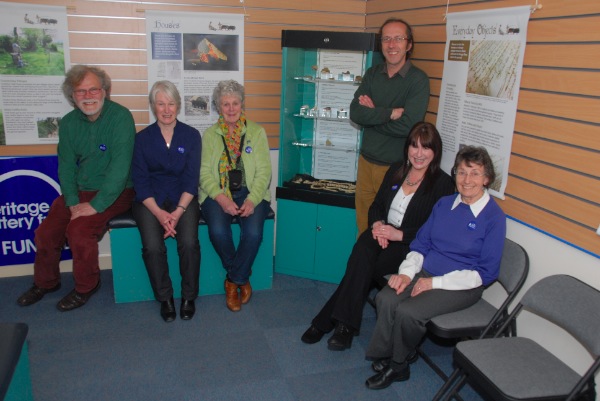 Yesterday Hope and Castleton Historical Societies launched the Lives of the Common People exhibition at Castleton Visitor Centre.
inHeritage has worked with the societies to produce the exhibition as part of our involvement throughout the project. The exhibition is one result from over a year of work by 65 volunteers who have researched hundreds of documents, excavated 55 test pits and surveyed three old routeways as part of the Heritage Lottery Fund supported Lives of the Medieval Common People.


The societies developed the themes, in a session with the project steering group led by Bill at Castleton Visitor Centre in March. These are the search for the common people, farmers, lead miners, routes, churches, houses and everyday objects. Bill drafted nine panels of text based on this session, selected photographs taken by participants and directed society members to take photographs specially for the exhibition. Once the steering group were happy with the text and images, inHeritage offered 8 different design styles with varying types of layout and fonts to the group to choose. The final style was a combination of two of these sample layouts. We then managed production, choosing a drop-down banner style as the best solution to hang in the visitor centre and for later use by the societies.

The steering group also chose finds from the test pits to display in two exhibition cabinets. These include parts of a human skeleton, a cat skeleton, clay tobacco pipes, pottery and medieval window glass.

Forty people attended the launch of the exhibition yesterday, all of them either participating in project research or providing their gardens for test pits.  The exhibition was opened by Ken Smith, Cultural Heritage Team Manager for the Peak District National Park Authority, with Chris Pennell and Geoff Nickolds from the HLF’s East Midlands committee also present.

The exhibition is open until Thursday 30th May. Entry is free during the visitor centre’s opening times. You can find times and other centre details on the Authority’s website.
The exhibition will then be displayed by Hope Historical Society at Hope Wakes Week between Saturday 22nd and Sunday 30th June.
The Societies are grateful to the Heritage Lottery Fund, the Peak District National Park Authority and the University of Sheffield for their support.