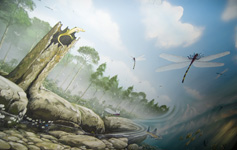 Interpretative plan followed by the exhibition space for the new visitor centre.
We wrote an interpretation plan for Buxton Country Park and Poole’s Cavern, before creating a new exhibition space during the renovation of the Cavern’s visitor centre.
The exhibition occupies three interconnecting spaces between the visitor centre ticket desk and the cavern entrance. The brief was to interpet the main key messages of the cavern relating to its geological formation, archaeological finds and literary associations. The target audiences were families and school parties, the latter mostly comprising classes at Key Stage 2.

inHeritage teamed up with Hathersage-based design company Hammer Design to produce a series of four flat panel wall display, an audio-visual presentation, a ceiling mural and a set of three floor-standing cartoon figures from the history of the cavern.
The exhibition was installed in July 2007 in time for the re-opening of the visitor centre which was formally opened by the Duke of Devonshire on the 19th May 2008.